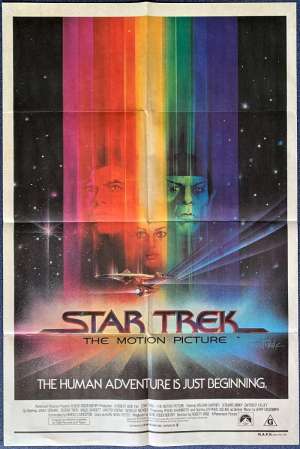 Australian One Sheet Teaser Poster with stunning Bob Peak artwork.Star Trek: The Motion Picture is a 1979 science fiction film released by Paramount Pictures. It is the first Star Trek film and stars the cast of the original 1966–1969 Star Trek television series.i.e. William Shatner & Leonard Nimoy. When the original television series was cancelled in 1969, Star Trek creator Gene Roddenberry lobbied Paramount to continue the franchise through a film. The success of the series in syndication convinced the studio to begin work on a feature film in 1975. In 1978, Paramount assembled the largest press conference held at the studio since the 1950's to announce that double Academy Award–winning director Robert Wise would direct a $15 million film adaptation of the television series.