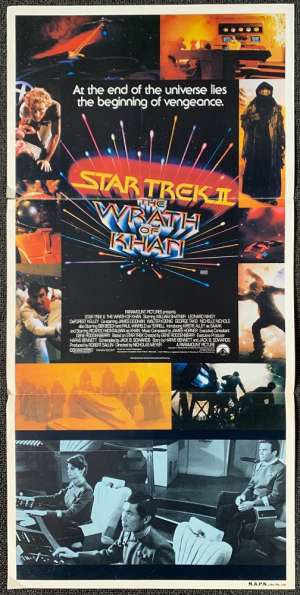 Daybill Poster.Star Trek II: The Wrath of Khan is a 1982 American science fiction film directed by Nicholas Meyer and based on the television series Star Trek. It is the second film in the Star Trek film series. The plot features Admiral James T. Kirk (William Shatner) and the crew of the starship USS Enterprise facing off against the genetically engineered tyrant Khan Noonien Singh (Ricardo Montalbán), a character who first appeared in the 1967 Star Trek episode "Space Seed". When Khan escapes from a 15-year exile to exact revenge on Kirk, the crew of the Enterprise must stop him from acquiring a powerful terraforming device named Genesis. The film is the beginning of a story arc that continues with the film Star Trek III: The Search for Spock (1984) and concludes with the film Star Trek IV: The Voyage Home (1986).Leonard Nimoy had not intended to have a role in the sequel but was enticed back on the promise that his character would be given a dramatic death scene. Negative test audience reaction to Spock's death led to significant revisions of the ending. Among the film's technical achievements is being the first feature film to contain a sequence created entirely with computer graphics. Star Trek II: The Wrath of was a box office success, earning US$97 million (equivalent to about $257M in 2019) worldwide and setting a world record for its first-day box office gross. Critical reaction to the film was positive; reviewers highlighted Khan's character, the film's pacing, and the character interactions as strong elements. The Wrath of Khan is considered by many to be the best film in the Star Trek series and is often credited with renewing substantial interest in the franchise.