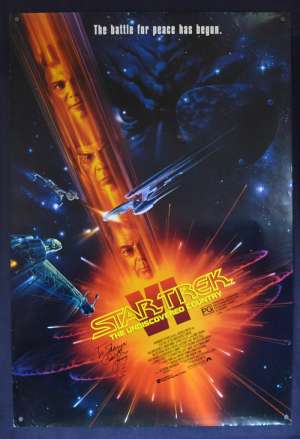 Original Australian One Sheet Poster artwork by John Alvin, autographed to 'Sharyn' by Walter Koenig who played Chekov in the original series. Star Trek VI: The Undiscovered Country is a 1991 science fiction film. It is the sixth feature film based on Star Trek and the last film featuring the entire cast of the original series. The sixth film in the series was initially planned as a prequel to the original series, with younger actors portraying the crew of the Enterprise while attending Starfleet Academy, but the idea was discarded because of negative reaction from the original cast and the fans. The film performed strongly at the box office and earned two Academy Award nominations, for Best Makeup and Best Sound Effects, and is the only Star Trek movie to win the Saturn Award for Best Science Fiction Film.