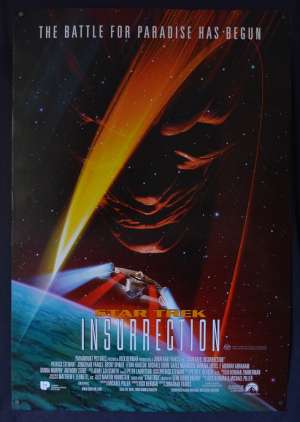 Original Australian one sheet movie poster double sided.Star Trek: Insurrection is a 1998 science fiction film and is the ninth feature film in the Star Trek film franchise, and is the third film in the series to star the cast of the television series Star Trek: The Next Generation. In addition to that cast, F. Murray Abraham, Donna Murphy and Anthony Zerbe also appeared in main roles. Insurrection was the highest-grossing film on its opening weekend, making US$22.4 million. Critical responses praised the performance of Patrick Stewart and the directing of Jonathan Frakes. Insurrection was nominated for both a Saturn Award and a Hugo Award, but the only award it received was a Youth in Film Award for Michael Welch.