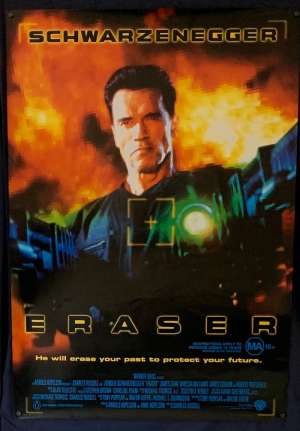 One Sheet Poster.Eraser is a 1996 American action film directed by Chuck Russell and starring Arnold Schwarzenegger, James Caan, James Coburn, Robert Pastorelli and Vanessa L. Williams. The film follows a U.S Marshal of WITSEC who protects a senior operative testifying about an illegal arms deal and is forced to fight his former allies when one of the players is revealed to be a mole inside WITSEC.The film was a commercial success, grossing over $242 million against a budget of $100 million. Critics praised Schwarzenegger's performance, the action sequences and the visual effects. It was released in the United States on June 21, 1996 and was nominated for an Academy Award for Best Sound Effects Editing in 1997.