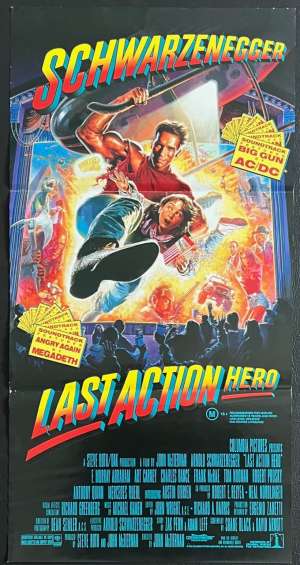 Rare Daybill Poster format with art by Morgan Weistling. Last Action Hero is a 1993 American comic fantasy-action film directed and produced by John McTiernan. It is a satire of the action genre and associated clichés, containing several parodies of action films in the form of films within the film.The film stars Arnold Schwarzenegger as Jack Slater, a fictional Los Angeles police detective. Slater is a fictional character even within the film, the hero of the Jack Slater series of action films. Austin O'Brien co-stars as a boy who is magically transported into a parallel universe by a magical movie ticket, one inhabited by Slater and the other characters in the Slater film series. Schwarzenegger also served as the film's executive producer and plays himself as the actor portraying Jack Slater, and Charles Dance plays an assassin who escapes from the Slater world into the real world.