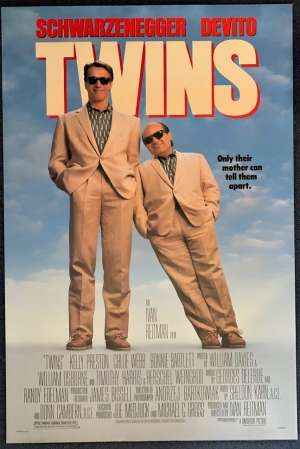 One Sheet Poster. Twins is a 1988 American buddy comedy film produced and directed by Ivan Reitman about unlikely twins (Arnold Schwarzenegger and Danny DeVito) who were separated at birth. The core of the film is the contrast between the streetwise Vincent (DeVito) and the intelligent but naive Julius (Schwarzenegger).The film was a commercial success, grossing $216 million worldwide. Instead of taking their usual salaries for the film, Schwarzenegger and DeVito both agreed with the studio to take 20% of the film's box office returns; this resulted in them receiving the biggest pay checks of their movie careers. It is now widely regarded as a classic 80’s comedy. The film was a commercial success, opening as the number one film in the United States earning $11 million on its opening weekend. It was the fifth biggest grossing film in the United States in 1988.It grossed $216 million worldwide. Following the film's success, Reitman and Schwarzenegger teamed up again for Kindergarten Cop (1990) and then again for Junior (1994), which also starred DeVito.