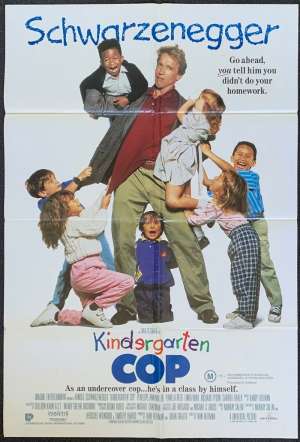 Australian One Sheet Poster.Kindergarten Cop is a 1990 American comedy-drama film, released to cinemas in the United States on December 21, 1990, directed by Ivan Reitman, distributed by Universal Pictures. Arnold Schwarzenegger stars as John Kimble, a tough police detective working undercover as a kindergarten teacher to apprehend the vicious drug dealer Cullen Crisp (Richard Tyson) before Crisp can get to his former wife and son. Pamela Reed plays his partner, Phoebe O'Hara, and Penelope Ann Miller plays Joyce, the teacher who becomes his love interest. The original music score was composed by Randy Edelman. The film was released in the United Kingdom on February 1, 1991, and topped the country's box office that weekend. The film was a box office success and grossed $91.4 million in North America, $110.5 in other territories, and $202 million worldwide.