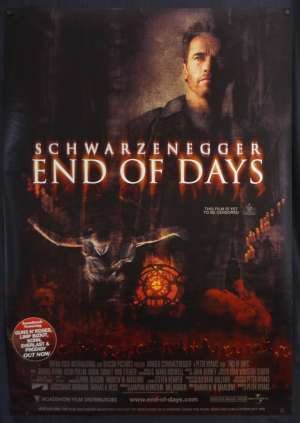 End of Days is a 1999 American supernatural horror action film directed by Peter Hyams and starring Arnold Schwarzenegger, Gabriel Byrne, Robin Tunney, Kevin Pollak, Rod Steiger, CCH Pounder, and Udo Kier. The film follows former New York Police Department detective Jericho Cane (Schwarzenegger) after he saves a banker (Byrne) from an assassin, however he finds himself embroiled in a religious conflict, and must protect an innocent young woman (Tunney) who is chosen by evil forces to conceive the Antichrist with Satan. Schwarzenegger’s role was originally written for Tom Cruise, but he chose to work on Magnolia and Schwarzenegger was then cast. Liv Tyler and Kate Winslet were preferred choices for the role of Christine York but were not available thus the role went to Robin Tunney. Directors Sam Raimi and Guillermo del Toro were offered End of Days, but turned it down due to other projects. Director James Cameron recommended Peter Hyams to the studio and Hyams was hired. The film was released by Universal Pictures on November 24, 1999. It has grossed $66.9 million in North America and $145.1 million elsewhere, for a worldwide total of $212 million making it a profitable success.