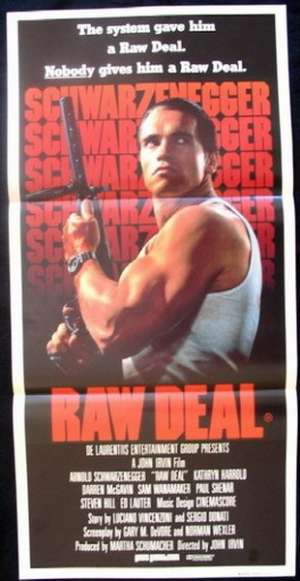 Daybill Poster.Raw Deal is 1986 American action film directed by John Irvin, starring Arnold Schwarzenegger, Kathryn Harrold, Darren McGavin and Sam Wanamaker. The film was originally intended to be called "Let's Make a Deal", and during production and filming this was changed to "Triple Identity". This referenced the fact that the lead character goes from being an FBI agent, to a small-town sheriff, and then to an undercover operative. In the end Raw Deal was the chosen title so it sounded like a regular action movie. Raw Deal made $5.4 million in 3 days going on to gross $15,946,969 in the US.