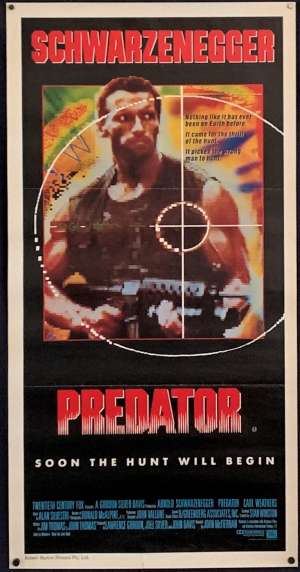 Daybill Poster.Predator is a 1987 American science film action film directed by John McTiernan. It stars Arnold Schwarzenegger as the leader of an elite special forces team, who are on a mission to rescue hostages from guerrilla territory in Central America. Kevin Peter Hall co-stars as the titular antagonist, a technologically advanced form of extraterrestrial life secretly stalking and hunting the group. Predator was written by Jim and John Thomas in 1985, under the working title of Hunter. Filming began in April 1986 and creature effects were devised by Stan Winston. Also starring in the film was Carl Weathers from the 'Rocky' films and Shane Black (writer of Lethal Weapon).