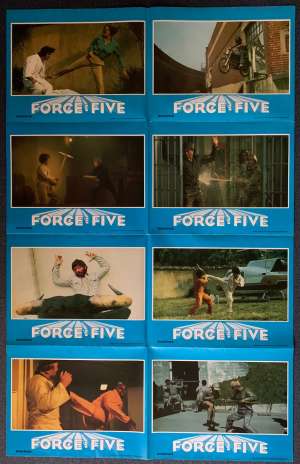 Photosheet Poster.Force:Five is a 1981 film directed by Robert Clouse. It stars Joe Lewis and Bong Soo Han and is a loose remake of the 1976 Jim Kelly action film Hot Potato.The storyline goes as follows A top government agent assembles a force of five martial arts experts to carry out a near-impossible assignment. They must topple the corrupt organization behind one of the world's most wealthy and powerful religious leaders. Variey magazine reviewed Force:Five by saying "Enough violent grunt and kick interludes to please and the talent looks good in the fight scenes..."