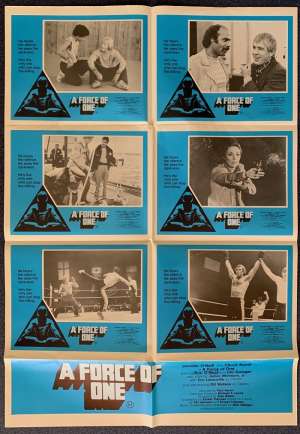 Original Australian Photosheet Poster A Force Of One

Photosheet Poster.A Force of One is a 1979 martial arts film starring Chuck Norris, Jennifer O'Neill, Ron O'Neal, Clu Gulager and Bill Wallace. The film was directed by Paul Aaron and written by Pat E. Johnson and Ernest Tidyman. A Force Of One was one of Tidyman’s biggest hits commercially, grossing over twenty million dollars domestically on a budget of 2.5 million. Like most Norris films the action is fast and the storyline is simple. When a team of undercover narcotics officers is targeted by a serial killer, the police recruit karate champion Matt Logan (Chuck Norris) to bring the murders to an end. Narcotics Officer Amanda "Mandy" Rust (Jennifer O'Neill) discovers that a traitor within the police ranks is behind the killings.