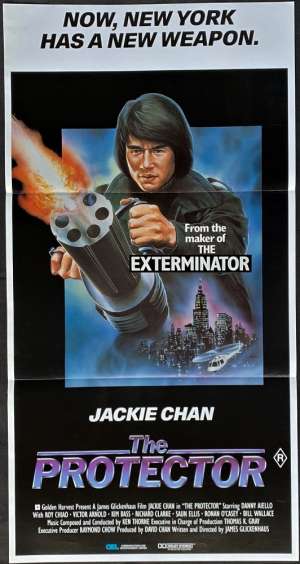 Very rare Daybill Poster with awesome Rudy Obrero artwork. The Protector (Chinese: 威龍猛探) is a 1985 Hong Kong-American action film directed by James Glickenhaus and starring Jackie Chan, Danny Aiello and Roy Chiao. It was Chan's second attempt at breaking into the American film market, after the 1980 film The Big Brawl, a film which had been a disappointment at the box office. According to his book I Am Jackie Chan: My Life in Action, Chan broke his hand while filming a stunt scene. Conflicts between Glickenhaus and Chan during production led to two official versions of the film: Glickenhaus' original version for American audiences and a Hong Kong version re-edited by Jackie Chan. Chan's re-edited version grossed HK $13,917,612 in Hong Kong, a very respectable sum at the time.Chan later directed Police Story as a response to this film.