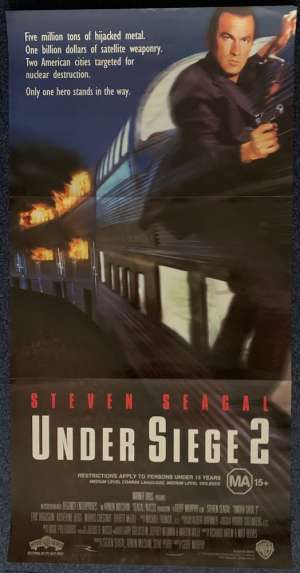 Daybill Poster Under Siege 2: Dark Territory is a 1995 American action thriller film directed by Geoff Murphy, starring Steven Seagal as the ex-Navy SEAL, Casey Ryback. Set on board a train traveling through the Rocky Mountains from Denver to Los Angeles, it is the sequel to the 1992 film Under Siege also starring Seagal. The title refers to the railroading term that the subject train was travelling through dark territory, a section of railroad track that has no train signals and in which communications between train dispatchers and the railroad engineers were impossible. The film was produced by Seagal along with Arnon Milchan and Steve Perry. The film's cast also included Eric Bogosian, Everett McGill, Morris Chestnut, Peter Greene, Kurtwood Smith and Katherine Heigl. The film was an early credit for Matt Reeves who wrote the script with a friend of his in college. The script was called Dark Territory at one stage and End of the Line at another. Reeves said the film was originally "meant to be very much like a Die Hard movie. However Seagal rewrote many of the scenes he was in. Under Siege 2 opened at #2 at the box office under Apollo 13 and made $12,624,402 for the weekend.