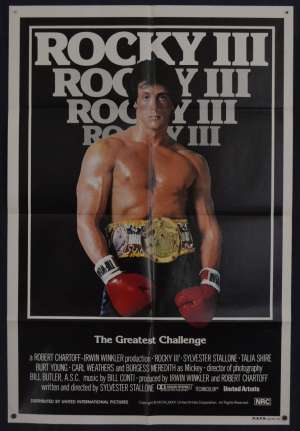 One Sheet Poster.Rocky III is a 1982 American film written, directed by, and starring Sylvester Stallone. It is the third installment in the Rocky film series, and the second in the franchise to be directed by Stallone.The movie features returning co-stars Carl Weathers, Burgess Meredith, Talia Shire and Burt Young. Rocky III also marks the film debuts of Mr. T as James "Clubber" Lang, and of professional wrestler Hulk Hogan as the supporting character "Thunderlips".Rocky III is the first installment in the series to be distributed by MGM/UA rather than United Artists alone. In 1980, United Artists, who owned the rights to the Rocky films, made Heaven's Gate, a film which cost $44 million and made only $3 million. In response, United Artists' owner, Transamerica, sold United Artists to MGM, forming MGM/UA in 1981. The film's main theme "Eye of the Tiger", was written by the group Survivor and became a smash hit single, topping the U.S. Billboard charts and received an Academy Award nomination for Best Original Song.