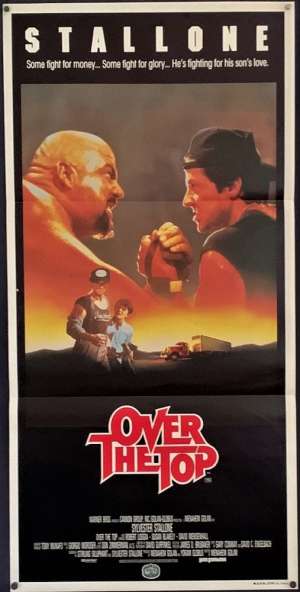 Rare Daybill Poster.Over the Top is a 1987 American sports drama film starring Sylvester Stallone. It was produced and directed by Menahem Golan, and its screenplay was written by Stirling Silliphant and Stallone. The original music score was composed by Giorgio Moroder. The main character, Lincoln Hawk, played by Stallone, is a long-haul truck driver who tries to win back his alienated son, Michael, while becoming a champion arm wrestler. Multi-time world arm wrestling champion and future professional wrestler Scott Norton also makes an appearance along with other professional arm wrestlers such as Allen Fisher, John Vreeland, Cleve Dean and Andrew "Cobra" Rhodes (as the final match referee).Professional arm wrestler John Brzenk also makes an appearance. The film was shot for about 9 weeks from June 9 to August 15, 1986.The military academy scenes, portrayed as being in Colorado, were filmed at Pomona College in Claremont, California in 1986.The Kirkeby mansion at 750 Bel Air Road, Los Angeles (also the home of the Clampett family on the CBS comedy The Beverly Hillbillies) was used to portray the Cutler estate. Parts of the film were also shot in Monument Valley, Utah (the location of many John Wayne films).