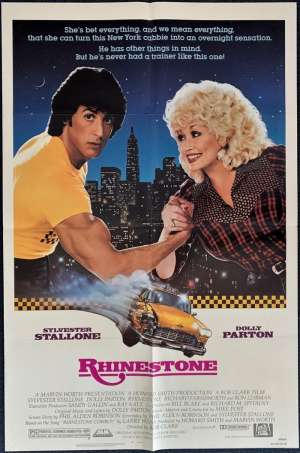 USA One Sheet Poster with John Alvin Art.Rhinestone is a 1984 American musical comedy film directed by Bob Clark from a screenplay by Sylvester Stallone and Phil Alden Robinson and starring Sylvester Stallone and Dolly Parton. Stallone reportedly turned down Romancing the Stone and Beverly Hills Cop (1984) he left the latter project due to creative differences in what he thought should be the theme and storylines.Consequently Stallone made Rhinestone. The original director was supposed to be Mike Nichols (Working Girl) and it was supposed to be shot in New York but it was not mean't to be. Stallone was paid $5 million and a percentage of the gross and has been quoted as saying ‘the most fun I ever had on a movie was with Dolly Parton on ‘Rhinestone’. The soundtrack album gave Dolly Parton two top ten country singles: "Tennessee Homesick Blues" and "God Won't Get You".