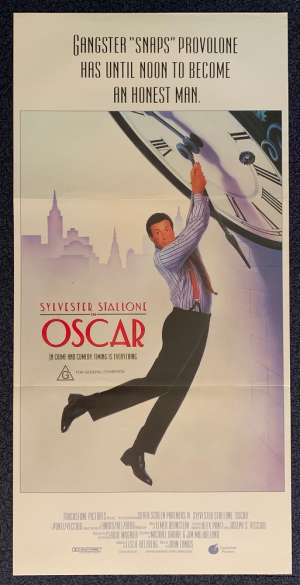 Daybill Poster.Oscar is a 1991 American slapstick crime comedy film directed by John Landis. Based on the Claude Magnier stage play, it is a remake of the 1967 French film of the same name, but the setting has been moved to Depression-era New York City and the plot centres on a mob boss trying to go straight. The film stars Sylvester Stallone, (John Landis' first choice for the lead role was Al Pacino. He was going to be paid $2 million but was then offered $3 million for Dick Tracy thus Stallone was offered the role.) Marisa Tomei, Ornella Muti and Tim Curry. The film score was composed by Academy Award winning composer Elmer Bernstein. This was a rare attempt by Stallone at doing a comedy role.