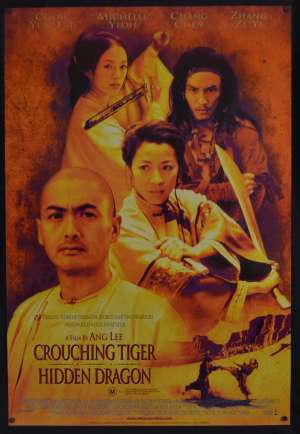 Crouching Tiger, Hidden Dragon is a 2000 wuxia film, conceived and directed by Ang Lee. It features an international cast of Chinese actors, including Chow Yun-fat, Michelle Yeoh, Zhang Ziyi and Chang Chen. The film is based on a novel of the same name that is part of the Crane Iron Pentalogy, a wuxia series by Wang Dulu. A multinational venture, the film was made on a US$17 million and became a surprise international success, grossing $213.5 million worldwide. With dialogue in Mandarin, subtitled for various markets, the film grossed US$128 million alone in the United States, becoming the highest-grossing foreign-language film produced overseas in American history. It received universal critical acclaim receiving over 40 awards. It was nominated for 10 Academy Awards, including Best Picture, and won Best Foreign Language Film (Taiwan), Best Art Direction, Best Original Score and Best Cinematography. The film also won four BAFTAs and two Golden Globe Awards, one for Best Foreign Film. Along with its awards success, Crouching Tiger continues to be hailed as one of the greatest and most influential martial arts films. The film has been praised for its story, direction, and cinematography, and for its martial arts sequences.