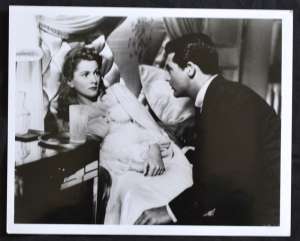 Movie Still Reprint.Suspicion (1941) is a romantic psychological thriller directed by Alfred Hitchcock, and starring Cary Grant and Joan Fontaine as a married couple. It also stars Sir Cedric Hardwicke, Nigel Bruce, Dame May Whitty, Isabel Jeans, Heather Angel, and Leo G. Carroll. Suspicion is based on Francis Iles's novel Before the Fact (1932).For her role as Lina, Joan Fontaine won the Academy Award for Best Actress in 1941. This is the only Oscar-winning performance in a Hitchcock film.