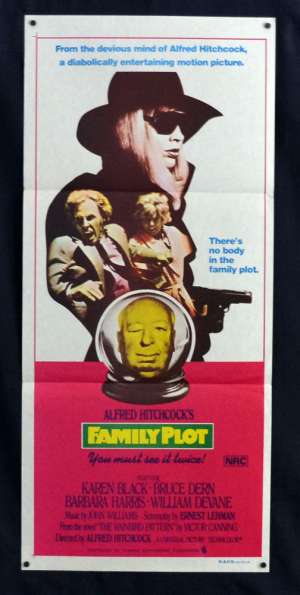 Daybill Poster.Family Plot is a 1976 American dark comedy/thriller film that was the final film directed by Alfred Hitchcock. The film was based on Victor Canning's novel The Rainbird Pattern, which Ernest Lehman adapted for the screen. The film stars Karen Black, Bruce Dern, Barbara Harris and William Devane. The film was screened at the 1976 Cannes Film Festival, but was not entered into the main competition. The story involves two couples; one couple are amateur petty criminals, the other couple are smooth professionals. Their lives come into conflict because of a search for a missing heir. Barbara Harris was nominated for Best Actress – Motion Picture Comedy or Musical at the 34th Golden Globe Awards.