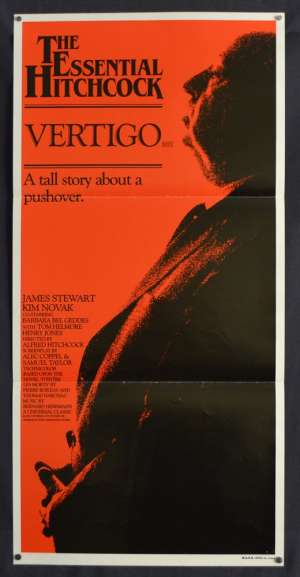 Daybill Poster.Vertigo is a 1958 American psychological thriller film directed and produced by Alfred Hitchcock.The story was based on the 1954 novel D'entre les morts (From Among the Dead) by Boileau-Narcejac.The screenplay was written by Alec Coppel and Samuel A. Taylor.Starring James Stewart as former police detective John "Scottie" Ferguson and Kim Novak as Madeleine. It is the first film to utilize the dolly zoom, an in-camera effect that distorts perspective to create disorientation, to convey Scottie's acrophobia. As a result of its use in this film, the effect is often referred to as "the Vertigo effect". Vertigo received mixed reviews upon initial release, but is now often cited as a classic Hitchcock film and one of the defining works of his career.