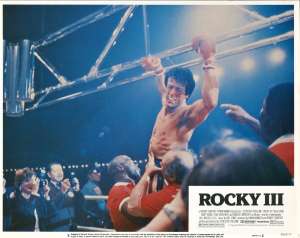 USA Lobby Card 11"x14".Rocky III was written, directed by, and starring Sylvester Stallone. It is the third installment in the Rocky film series, and the second in the franchise to be directed by Stallone. The movie features returning co-stars Carl Weathers, Burgess Meredith, Talia Shire and Burt Young. Rocky III also marks the film debuts of Mr. T as James "Clubber" Lang, and of professional wrestler Hulk Hogan as the supporting character "Thunderlips". Rocky III was nominated for both the Award of the Japanese Academy for Best Foreign Language Film and Best Motion Picture at the Image Awards. The film's theme song Eye of the Tiger was nominated for Best Original Song at the Academy Awards, the BAFTA Film Awards and the Golden Globes.