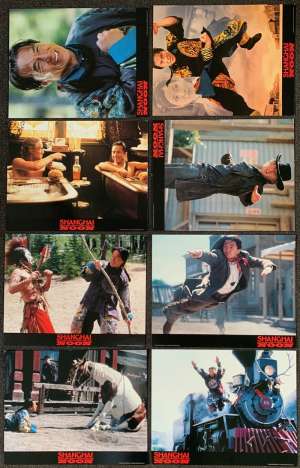 USA Lobby Card Set.Shanghai Noon is a 2000 martial arts Western comedy film starring Jackie Chan, Owen Wilson and Lucy Liu. The first in the Shanghai film series and marking the directorial debut of Tom Dey, Shanghai Noon was written by Alfred Gough and Miles Millar. The film was a commercial success.The film, set in Nevada and other parts of the American West in the 19th century, is a juxtaposition of a Western with a kung fu action film with extended martial arts sequences, as reflected by its title, which is a wordplay on the iconic western High Noon. It also has elements of comedy and the "Buddy Cop" film genre, featuring two vastly different heroes (a Chinese imperial guard and a white Western outlaw) who team up to stop a crime.The film was a critical and commercial success.