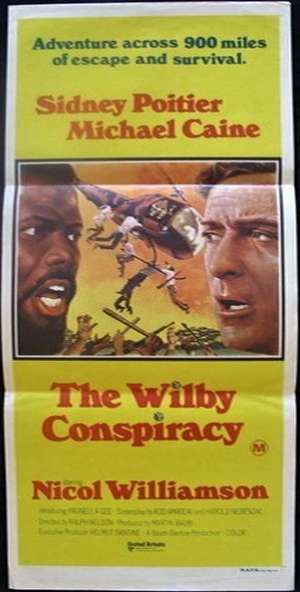 Daybill Poster.The Wilby Conspiracy is a 1975 DeLuxe Color thriller film directed by Ralph Nelson and starring Michael Caine, Sidney Poitier, and Nicol Williamson. Filmed in Kenya, it was written by Rodney Amateau, based on the 1972 novel by Peter Driscoll. The storyline is as such:In apartheid-era South Africa, Shack Twala (played by Sidney Poitier), a black revolutionary who had served time on Robben Island, is freed by Rina van Niekerk (Prunella Gee), his Afrikaner defence attorney, because he would be a victim of retroactive legislation. Rina, estranged from her husband Blane (Rutger Hauer), is having a relationship with an English mining engineer, Jim Keogh (Michael Caine), who has attended Shack's trial. Surprised by the verdict, Rina, Jim and Shack go off to celebrate at her house. They are stopped by policemen who are conducting identity document checks and arresting everyone who does not have their papers on them. As Shack has only just been released from prison he will not receive his papers until the next day. The policeman and Shack antagonise each other leading to Shack being handcuffed and arrested. When Rina attempts to pull the policeman off Shack, the policeman hits her, knocking her to the ground. Jim assaults and knocks out the policeman making all three fugitives.