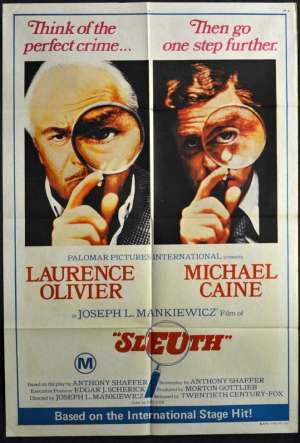 One sheet Poster.Sleuth 1972 is a mystery thriller film directed by Joseph L. Mankiewicz. The screenplay by British playwright Anthony Shaffer was based on his 1970 Tony Award-winning play Sleuth. The film stars Laurence Olivier and Michael Caine, both of whom were nominated for an Academy Award for their performance. This was Mankiewicz's final film. Critics gave the film overwhelmingly positive reviews and would later note similarities between it and Caine's 1982 film Deathtrap.