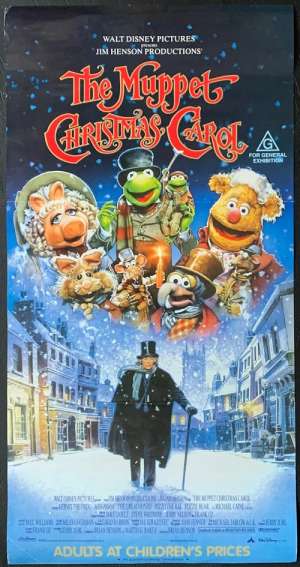 Rare Daybill Poster.The Muppet Christmas Carol is a 1992 American Christmas film directed by Brian Henson (in his feature directorial debut) from a screenplay by Jerry Juhl. Adapted from the 1843 novella A Christmas Carol by Charles Dickens, it stars Michael Caine as Ebenezer Scrooge, alongside Muppet performers Dave Goelz, Steve Whitmire, Jerry Nelson, and Frank Oz. Although artistic license is taken to suit the aesthetic of the Muppets, The Muppet Christmas Carol otherwise follows Dickens's original story closely. It is the fourth theatrical film in The Muppets franchise, and the first to be produced following the deaths of the Muppets creator Jim Henson and the performer Richard Hunt; the film is dedicated to both. The film was released in the United States on December 11, 1992 and  was a modest box office success and received mostly positive reviews.