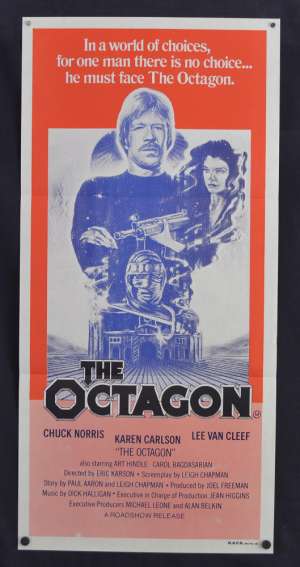 Daybill Poster.The Octagon is a 1980 action film starring Chuck Norris, Karen Carlson, Lee Van Cleef and Ernie Hudson. It was directed by Eric Karson and written by Paul Aaron and Leigh Chapman. The film involves a martial artist (Chuck Norris) who must stop a group of terrorists trained in the ninja style by his half-brother (Tadashi Yamashita). The movie was Norris' third martial arts film in a row, after Good Guys Wear Black and A Force of One. It was filmed in Los Angeles, California and released on August 14, 1980. It is notable for its inventive use of 'voice over' effects to portray the inner life of Norris' character, Scott James. This was actor Richard Norton's film debut. The Octagon was a commercial success.