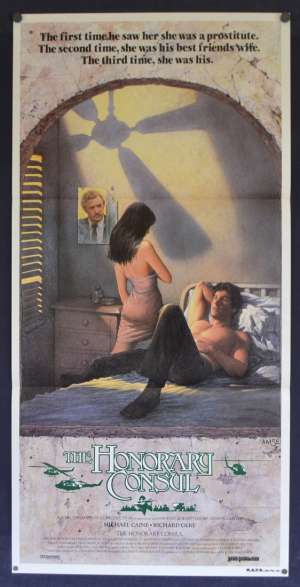 Daybill Poster with Richard Amsel artwork.The Honorary Consul, also known as Beyond the Limit, is a 1983 British-Mexican drama film directed by John Mackenzie and starring Michael Caine, Richard Gere, Bob Hoskins, and Elpidia Carrillo. It is based on the novel The Honorary Consul by Graham Greene. The Storyline was as follows: Set in a small politically unstable Latin American country,[a] the story follows the half-English, half-Latin doctor, Eduardo Plarr (Richard Gere), who left his home to find a better life. Along the way he meets an array of people, including the British Consul Charley Fortnum (Michael Caine), a representative in Latin America who is trying to keep a revolution from occurring, who is also a remorseful alcoholic. Another person the doctor meets is Clara (Elpidia Carrillo), whom he immediately desires, but there is a problem: Clara is Charley's wife. The film was produced by Norma Heyman, marking the first time that a British woman entirely produced an independent feature film in history. The movie was filmed on location in Veracruz, Mexico and Mexico City, and at the Shepperton Studios in Surrey, England. The film was successful in Europe, and particularly in the UK as it was a British production.