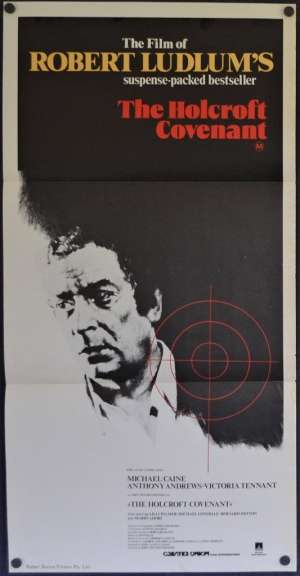 Daybill Poster.The Holcroft Covenant is a 1985 thriller film based on the Robert Ludlum novel of the same name. The film stars Michael Caine (Noel Holcroft) and was directed by John Frankenheimer. The script was written by Edward Anhalt, George Axelrod, and John Hopkins. The film was part of a five picture slate from Thorn EMI in 1985. The storyline is as follows: Noel Holcroft is a New York architect who receives an unexpected inheritance from his ex-Nazi father: $40 billion in funds from the Third Reich, now intended to aid Holocaust survivors. But as Holcroft delves into the treasures mysterious history, he is thrust into a pulse-pounding adventure in which he alone stands in the way of a plan that is moving inexorably toward its terrifying conclusion: the rise of an all-powerful Fourth Reich. James Caan was originally cast as Noel Holcroft however he walked off the set due to disagreements with the producers. Director John Frankenheimer later said "I will be forever grateful to James Caan. Forever. Because he gave me the best gift that's ever happened to me in my career, which is Michael Caine." As far as I'm concerned, he is probably the best actor I've ever worked with," added Frankenheimer. "Certainly the best actor I've ever worked with who gets the girl." Filming started in Berlin on 2 July 1984. After Caan left the film, filming resumed on 11 July with Michael Caine. Scenes were also shot in Munich, Lindau and London.