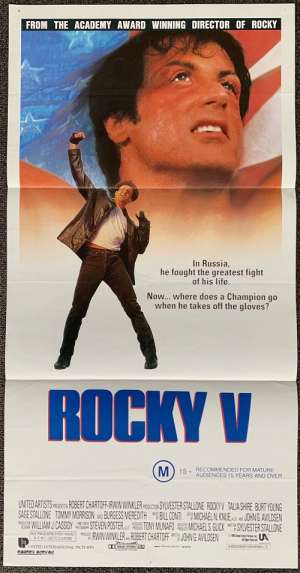 Daybill Poster. Rocky V is a 1990 American boxing sports drama film. It is the fifth film in the Rocky series, written by and starring Sylvester Stallone and co-starring Talia Shire, Stallone's real-life son Sage, and real-life boxer Tommy Morrison, with Morrison in the role of Tommy Gunn, a talented yet raw boxer. Sage played Rocky Balboa, Jr, whose relationship with his famous father is explored. After Stallone directed the second through fourth films in the series, Rocky V saw the return of John G. Avildsen, whose direction of Rocky won him an Academy Award for Best Director. Rocky V marked the final appearances of Talia Shire and Burgess Meredith in the Rocky series. In the original script, Rocky is killed during the final fight with Tommy, dying in Adrian's arms in the street. Through most of the filming and production, this was to be the outcome; it was not until the film was nearing completion that Stallone decided against Rocky's death, and switched to the film's eventual ending.