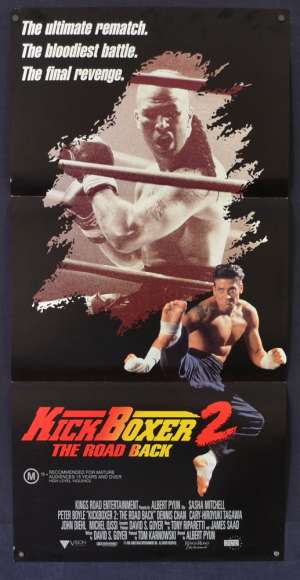 Rare original Australian Daybill movie poster. Kickboxer 2 (also known as Kickboxer 2: The Road Back) is a 1991 American martial arts film directed by Albert Pyun and written by David S. Goyer. It is the first sequel to the 1989 film Kickboxer, and stars Sasha Mitchell in the role of David Sloane, the brother of Kickboxer's lead character Kurt, portrayed by Jean-Claude Van Damme in the first movie. The film had a limited theatrical release and so any original posters are now highly sort after.