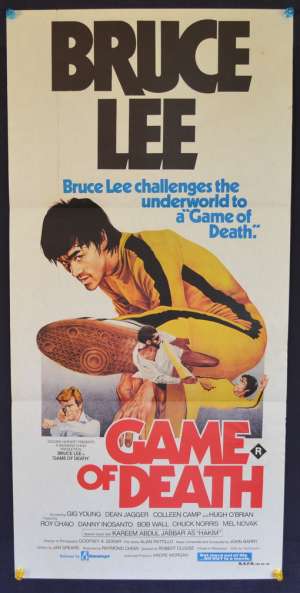 Bob Gleason poster artwork. Game of Death is a 1978 Hong Kong action film co-written (under the pseudonym Jan Spears along with Raymond Chow) and directed by Robert Clouse. The film stars Bruce Lee, Kim Tai-jong, Yuen Biao, Gig Young, Dean Jagger, Colleen Camp and Robert Wall. Game Of Death had its origins from an in-complete 1972 Hong Kong martial arts film directed, written, produced by and starring Bruce Lee in his final film attempt. Lee died during the making of the film. Over 100 minutes of footage was shot prior to his death, some of which was later misplaced in the Golden Harvest archives. The 1978 version uses portions of the original 1972 cut (only 11 minutes and 7 seconds) married to an entirely new plot involving a new character - Billy Low. Billy is struggling against a racketeering "syndicate" after gaining international success as a martial arts movie star. During filming, Lee received an offer to star in Enter the Dragon, the first kung fu film to be produced by a Hollywood studio (Warner Bros.), and with a budget unprecedented for the genre ($850,000). Lee died of cerebral edema before the film's release. Game Of Death was successful at the Hong Kong box office in 1978 grossing HK$3,436,169. It was released in the USA in 1980 grossing 10,000,000 and Australia had a release in 1981.