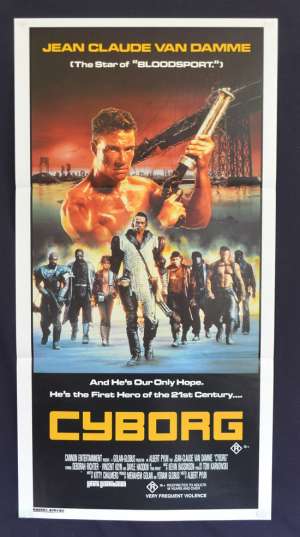 Original Australian Daybill movie poster.Cyborg, known in the UK as Cyborg 009,is a 1989 American martial-arts cyberpunk film directed by Albert Pyun. Jean-Claude Van Damme stars as Gibson Rickenbacker, a mercenary who battles a group of murderous marauders led by Fender Tremolo (Vincent Klyn) along the East coast of the United States in a post-apocalyptic future. The film is the first in Pyun's Cyborg Trilogy. It was followed by 1993's Knights (originally entitled The Kingdom of Metal: Cyborg Killer) and Omega Doom in 1997. Cyborg was followed by sequels Cyborg 2 and Cyborg 3: The Recycler.