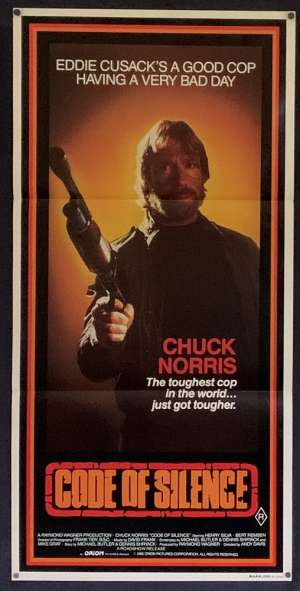 Daybill Poster.Code of Silence is a 1985 American action film directed by Andrew Davis, and starring Chuck Norris, Henry Silva, Dennis Farina and Molly Hagan. The film was released in the United States on May 3, 1985.It was an atypical film for Norris, whose previous ones had been known more for his martial-arts skill. A crime drama, it was filmed on location in Chicago with a few sub-plots. Screenwriters Michael Butler and Dennis Shryack originally wrote this in 1979 for Warner Bros. as Dirty Harry IV: Code of Silence. The Sudden Impact script was chosen instead and Code Of Silence became the Chuck Norris vehicle. It features Norris as Sgt. Eddie Cusack, a streetwise plain clothes officer who takes down a crime czar responsible for officers being wounded in a botched drug raid. In the film's climax, Norris teams with a crime-fighting robot named "Prowler." Dennis Farina was an actual Chicago police officer during the making of this film, moonlighting before becoming a full-time actor when cast in the leading role of Michael Mann's 1986 television series, Crime Story. The film was released by Orion Pictures in early May 1985 and debuted at number 1.The film went on to gross a total of $20,345,361, making it the second most successful Chuck Norris vehicle at the time behind Missing in Action.