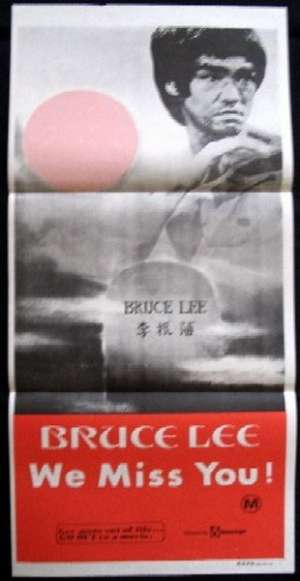 Daybill Poster. Directed by Koon Cheung and starring LeeBruce Li (credited here as Lei Hsiao Lung) playing a character called ‘Stone’, a martial arts teacher and a huge fan of Bruce Lee. The storyline of the film was as follows: One day, after class, a group of students bring a newspaper to Stone, the headline proclaiming that Bruce Lee has died. Stone, being the aforementioned Lee fanatic, is thrown into a state of shock over the news. Pao, his brother, realizing Stone's anguish, decides to take him out for a drink. After having quite a few too many, a belligerent Stone theorizes that there was foul play involved in Lee's death. Pao then takes his drunken brother to a friend's house to sleep it off. That night, Stone is visited by the spirit of Bruce Lee. Stone confronts Lee, demanding to hear the details of his early demise. Lee only raises his hand, sending Stone reeling back to bed, and thus awakening him from his slumber. Stone realizes that Lee wants him to investigate his murder, and uncover the real truth.