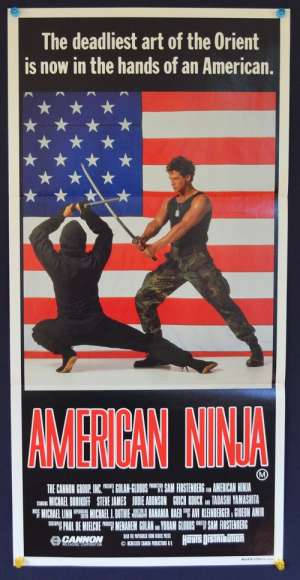 Daybill Poster American Ninja.American Ninja is a 1985 American martial arts action film produced by Menahem Golan and Yoram Globus's Cannon Films. Directed by Sam Firstenberg, who specialized in this genre in the 1980s, the film stars Michael Dudikoff in the title role, and is the first instalment in the American Ninja franchise, followed by American Ninja 2: The Confrontation. Originally the studio wanted Chuck Norris to star. Some sources stated he didn’t want to have to cover up his face. Michael Dudikoff was cast but had no martial arts experience but he was already very athletic. Fight choreographer Mike Stone, who was an accomplished Martial Arts expert assured the producers that he would pick up the moves which he did. The film was originally called American Warrior and was released in UK cinemas under that title, but was changed to American Ninja for all other releases. It was a financial success and since then, it has been considered a cult film.