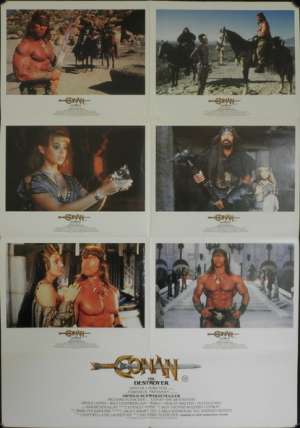 Photosheet Poster.Conan the Destroyer is a 1984 American epic sword and sorcery film directed by Richard Fleischer from a screenplay by Stanley Mann and a story by Roy Thomas and Gerry Conway. Based on the character Conan the Barbarian created by Robert E. Howard, it is the sequel to Conan the Barbarian (1982). The film stars Arnold Schwarzenegger and Mako reprising their roles as Conan and Akiro, the Wizard of the Mounds, respectively. The cast also includes Grace Jones, Wilt Chamberlain, Tracey Walter, and Olivia d'Abo. Former professional wrestler Pat Roach, who memorably played the German Mechanic in Raiders of the Lost Ark and the Thuggee Overseer in Indiana Jones and the Temple of Doom, was cast as crystal palace Man Ape/sorcerer Toth-Amon. André the Giant played Dagoth, but was not credited in the film, as he was in costume. Conan the Destroyer was theatrically released in the United States on June 29, 1984, by Universal Pictures and grossed $31 million in the U.S.. Schwarzenegger, Fleischer, and De Laurentiis subsequently teamed up again to make Red Sonja a year later.