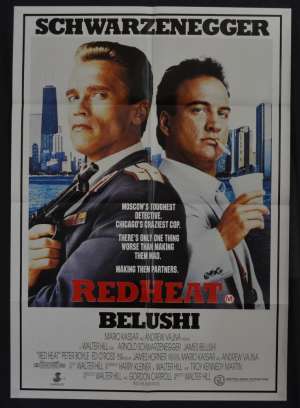 One Sheet Poster.Red Heat is a 1988 American buddy cop action film directed by Walter Hill. The film stars Arnold Schwarzenegger, as Moscow narc Ivan Danko, and James Belushi, as Chicago detective Art Ridzik. The film was released with the tagline "Moscow's toughest detective. Chicago's craziest cop. There's only one thing more dangerous than making them mad: making them partners." It was the first American film given permission to shoot in Moscow's Red Square - however, most of the scenes set in the USSR (with the exceptions of the establishing shots under the main titles and the final lengthy shot in Red Square behind the end credits) were actually shot in Hungary.