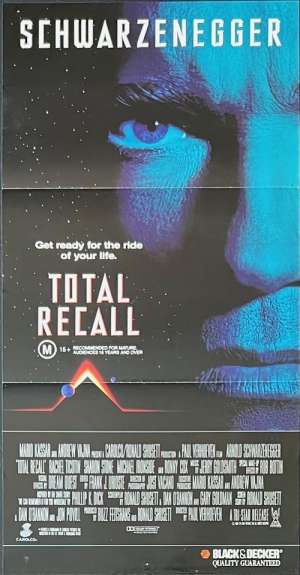 Daybill Poster.Total Recall is a 1990 American science fiction action film directed by Paul Verhoeven, starring Arnold Schwarzenegger, Rachel Ticotin, and Sharon Stone. The film is loosely based on the Philip K. Dick story "We Can Remember It for You Wholesale". It tells the story of a construction worker who is having troubling dreams about Mars and a mysterious woman there. It was written by Ronald Shusett, Dan O'Bannon, Jon Povill, and Gary Goldman, and won a Special Achievement Academy Award for its visual effects. The original score composed by Jerry Goldsmith won the BMI Film Music Award.The film was one of the most expensive films made at the time of its release,although estimates of its production budget vary and it is not certain whether it ever actually held the record. Rambo III, Who Framed Roger Rabbit and Die Hard 2: Die Harder are considered the most expensive films released within the production period and year of release of Total Recall.