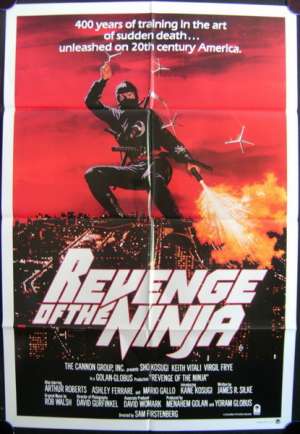 Original Australian One Sheet Poster.Revenge of the Ninja is a 1983 American martial arts–thriller film starring martial artist and cult actor Sho Kosugi as a ninja trying to protect his only son from a cabal of ruthless gangsters. It is the second entry in Cannon Films' "Ninja Trilogy" anthology series, starting with Enter the Ninja (1981) and ending with Ninja III: The Domination (1984). It was directed by Sam Firstenberg and also stars Keith Vitali, Virgil Frye, and lead Sho Kosugi's son, Kane Kosugi. The film has become a minor cult hit due to its elaborate martial arts sequences.