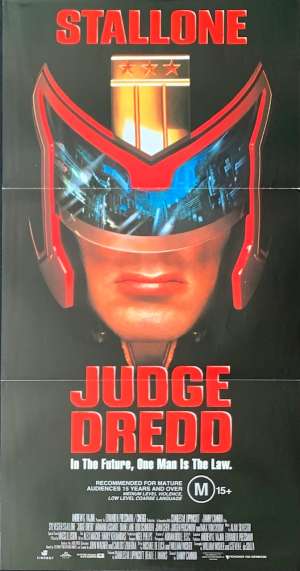 Daybill Poster.Judge Dredd is a 1995 American science fiction action film, based on the comic book character of the same name and directed by Danny Cannon. The film stars Sylvester Stallone, Diane Lane, Rob Schneider, Armand Assante, and Max von Sydow. The film takes place in 2080 and depicts a dystopian world and the crime-ridden metropolis Mega-City 1. Following an unspecified disaster that turned Earth into a "cursed" wasteland, the survivors established a corps of Judges whose role combines that of police, judge, jury and executioner. The film follows Judge Joseph Dredd ( Sylvester Stallone), one of the most dedicated Street Judges who had been framed for murder by his own half-brother—the psychotic Rico. The film was released on June 30, 1995 and received praise for its visual style, effects, stunts and action sequences. It was nominated in four categories at the Saturn Awards. Commercially the film brought a total of $113.5 million sales worldwide!