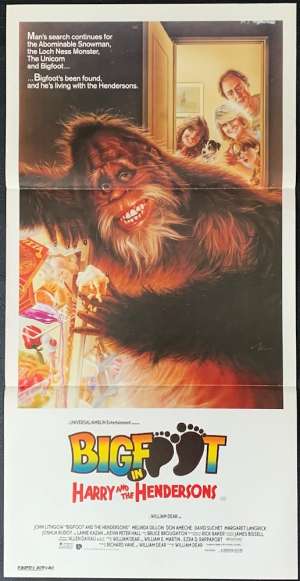 Harry and the Hendersons or Big Foot In Harry And The Hendersons as it was released in the UK and Australia is a 1987 American fantasy comedy film directed and produced by William Dear, and starring John Lithgow, Melinda Dillon, Don Ameche, David Suchet, Margaret Langrick, Joshua Rudoy, Lainie Kazan, and Kevin Peter Hall. Steven Spielberg served as an executive producer of this film (uncredited) while Rick Baker provided the makeup and the creature designs for Harry. It is the story of a family's encounter with the cryptozoological creature Bigfoot. The film won an Academy Award for Best Makeup, and inspired a follow-up TV series of the same name.