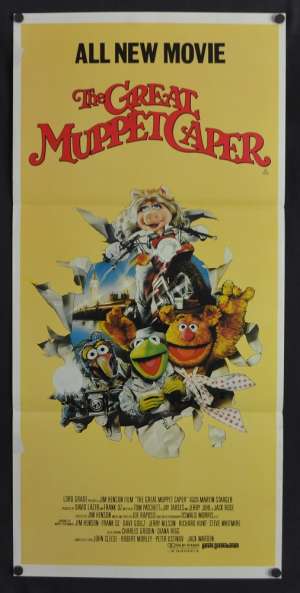 Daybill Poster with Drew Struzan artwork.The Great Muppet Caper is a 1981 mystery musical comedy film directed by Jim Henson, marking his feature directorial debut. The film is about the Muppets who must travel to London to stop a jewel heist. Dianna Rigg ,Charles Grodin and John Cleese starred. It is the second of a series of live-action musical feature films, starring Jim Henson's Muppets. The film was a British-American venture produced by Henson Associates and ITC Entertainment, and originally released by Universal Pictures on 26 June 1981. It is also the only Muppet feature film directed by Henson. Shot in the United Kingdom and London in 1980, the film was released shortly after the final season of The Muppet Show. The Great Muppet Caper has received generally positive reviews.