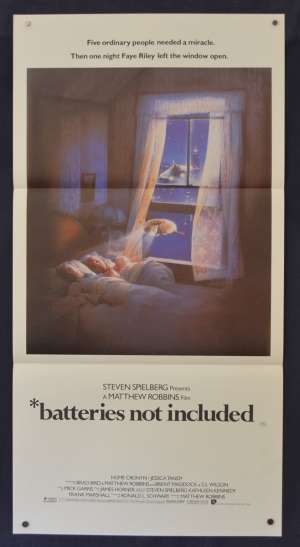 Poster artwork by Drew Struzan. Batteries Not Included (styled *batteries not included) is a 1987 family-comic science fiction film directed by Matthew Robbins and starring Hume Cronyn and Jessica Tandy. The film is about small extra-terrestrial living space ships that save an apartment block under threat from property development. The story was originally intended to be featured in the TV series Amazing Stories, but executive producer Steven Spielberg liked the idea so much that he decided to make it a theatrical release. It is also notable for being the feature film screenwriting debut of Brad Bird, who was one of the writers and producers of the movie. Many of the film's foreign releases (including at least Swedish, Finnish, French, German, Italian, Portuguese, American Spanish, and Japanese) used the title Miracle on 8th Street.