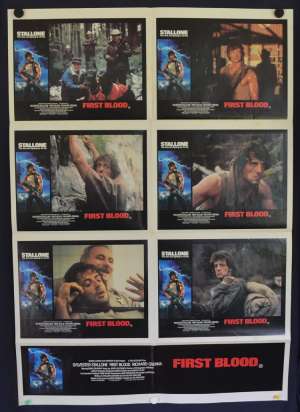 Drew Struzan Photosheet poster art. First Blood, also known as Rambo: First Blood Part I, is a 1982 American action adventure film directed by Ted Kotcheff. It is co-written by and starring Sylvester Stallone as John Rambo, a troubled and misunderstood Vietnam veteran who must rely on his combat and survival senses against the abusive law enforcement of a small town. Based on David Morrell's 1972 novel of the same name it is the first installment of the Rambo series. Brian Dennehy and Richard Crenna also appear in supporting roles. Many different actors and directors were considered for the above roles as the film rights to the book have been available since the seventies. For example director Sydney Pollack in late 1974 considered doing it with Steve McQueen as Rambo and Burt Lancaster as the sheriff.The film was released in the United States on October 22, 1982. Despite initial mixed reviews, the film was a box office success, grossing $47.2 million at the box office. Since its release, First Blood has received reappraisal from critics, with many praising the roles of Stallone, Dennehy, and Crenna, and has been recognized as a cult classic and an influential film in the action genre.