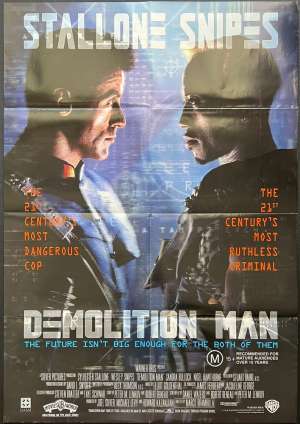 One Sheet Poster.Demolition Man is a 1993 American science fiction action film directed by Marco Brambilla in his directorial debut. The film stars Sylvester Stallone, Wesley Snipes, Sandra Bullock, Jack Black and Benjamin Bratt. The film was released in the United States on October 8, 1993.The film tells the story of two men: an evil crime lord and a risk-taking police officer. Cryogenically frozen in 1996, they are restored to life in the year 2032 to find mainstream society changed and all crime seemingly eliminated. Some aspects of the film allude to Aldous Huxley's dystopian novel, Brave New World. The film debuted at No. 1 at the box office.Demolition Man grossed $58,055,768 by the end of its box office run in North America and $159,055,768 worldwide. Critics reviewed the film as "A better-than-average sci-fi shoot-em-up with a satirical undercurrent, Demolition Man is bolstered by strong performances by Sylvester Stallone, Wesley Snipes, and Sandra Bullock."