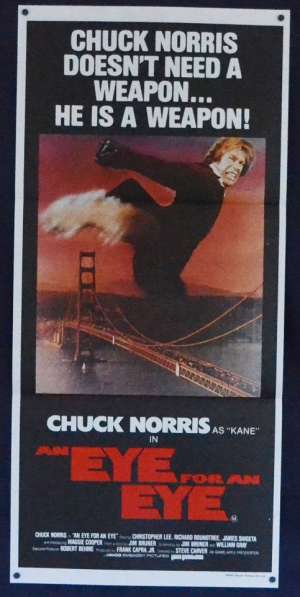 Original Australian Daybill movie poster. A Eye For An Eye.An Eye for an Eye is a 1981 American action film directed by Steve Carver, & starring Chuck Norris, Christopher Lee, Richard Roundtree, Matt Clark, Mako Iwamatsu, & Maggie Cooper. The storyline is as follows:Police detective Sean Kane (Chuck Norris) is any criminal's worst nightmare: a cop who's just as lethal with his lightning-quick martial arts moves as he is with his service revolver. But when his partner is brutally murdered, Kane quits the force & goes beyond the law to seek vengeance against the ruthless Morgan Canfield (Christopher Lee), a powerful & well-connected drug lord who destroys any man who stands in his way. But Kane has never been more ready for a fight.