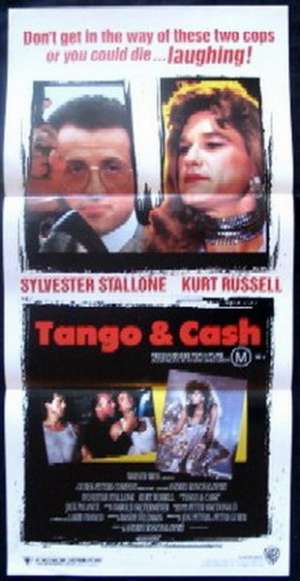 Daybill Poster.Tango & Cash is a 1989 American buddy cop action comedy film starring Sylvester Stallone, Kurt Russell, Jack Palance, and Teri Hatcher. Patrick Swayze was originally signed to star with Stallone before Russell but dropped out to do Roadhouse. Stallone and Russell star as Raymond Tango and Gabriel Cash respectively, two rival LAPD narcotics detectives, who are forced to work together after the criminal mastermind Yves Perret (Palance) frames both of them for murder. The film was chiefly directed by Andrei Konchalovsky, with Albert Magnoli and Peter MacDonald taking over in the later stages of filming, with Stuart Baird overseeing post-production. The film was released by Warner Bros. in the United States on December 22, 1989, the same day as Always. Both films were the last to be released in the 1980s. In September of 2019, Stallone revealed that he has a story written for a potential sequel. The filmmaker stated he is trying to convince Kurt Russell to sign onto the project, though he anticipates the film will be made.